All about Go Getter

All about Go Getter

The Go Getter 2 battery powered sound system is equipped with built-in Bluetooth receiver and optional AIR transmitter for wireless connection to additional companion speakers and/or assistive listening receivers (ALDs). Conventional hardwired companion speaker systems are also available. This makes the Go Getter series the perfect choice for sound projection applications in indoor or outdoor settings. Go Getter 2 is designed for users with no technical knowledge and setup is fast and easy. Separate bass and treble controls give the user full control over the sound projection. With true AC/DC power supply, 8 hours of battery run time, weather resistant speaker cone and UV treated - fade resistant case, the Go Getter is designed to go wherever there is a need for a powerful wireless sound system. 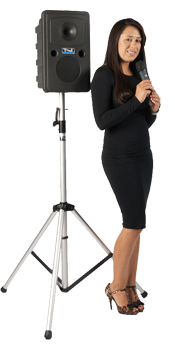 LINK Wireless Microphone System: Go Getter 2 sound systems can be equipped with one or two factory installed dual wireless microphone receivers. Two LINK microphones can be paired with each receiver for a total of four (4). Pairing is a one-time function. The handheld WH-LINK as well as the beltpack WB-LINK incorporate a volume and mute control so adjustments can be made on the spot rather than having to go to the main unit. The new LINK beltpack microphones feature a 3.5 mm locking plug. Handheld, headband/lapel combo, collar and UltraLite over the ear microphone is available with all packages. Transmission range is 300+ ft line of sight.

Bluetooth Receiver: The functionality, flexibility, and utility of the Go Getter 2 sound system is greatly increased with Bluetooth capability! The top-of-the-line Anchor Audio Bluetooth module allows you to connect your Bluetooth enabled device to your Anchor Audio system with a strong connection and an incredible range of up to 100 feet. 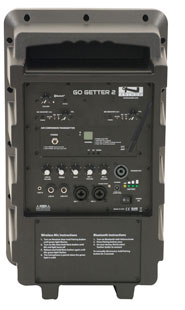 True to Anchor Audio character, operation is simple, and applications are endless.

Input Connectors: All Go Getter sound systems feature two balanced XLR phantom powered microphone inputs and one line input. The Line input is accessible through a 1/4" jack as well as a 3.5 mm mini stereo jack. All inputs along with wireless microphone(s) and Bluetooth receiver have separate volume controls providing users full control over the mix.

Output Connectors: Go Getter systems are equipped with a SpeakOn type companion speaker output jack. Whether the Go Getter unit has a wireless AIR companion transmitter or not, this output can be used to drive any companion speaker, be it for backup purposes or security concerns. 50 and 100 ft. cables are available in the A La Carte Menu. Furthermore, the Go Getter features a 1/4" post fader Line Out which can be used for daisy chaining multiple Go Getter unit, event recording, and/or hook up to an existing assistive listening system.

Wireless AIR Feature: The Go Getter AIR systems are equipped with a built-in transmitter that wirelessly connects to one or more Go Getter 2 AIR battery powered companion speakers. There is no limit to how many wireless AIR companion speakers can be added to a system as long as they are within transmission range of the main unit. The Go Getter 2 can also be purchased without the AIR transmitter (see GG-DP1/2 on the systems tab).

The Go Getter AIR system operates in the 902-928 MHz band. The transmitting Go Getter speaker and the AIR wireless companion speaker both feature a LED display with controls to synchronize the units to anyone of 100 user selectable channels. To preserve battery life when systems are used without wireless connection, both transmitter and receiver can be powered off individually. The GG-AIR companion speakers are equipped with their own volume controls, but volume cannot be increased to a higher level than that set on the main system. The Companion speaker also have separate bass and treble controls. AIR companion speakers can be placed at a distance up to 300 feet away from the transmitting unit and up to 150 feet away without experiencing latency.

Power: Go Getter speakers including AIR companion speakers can generate a sound pressure level pressure (SPL) of 109 dB which is the true performance measure of any system. Although many competitive systems boasts output wattages far exceeding Go Getter's rated output of 75 watts in AC mode and 50 watts in DC mode (RMS), these are merely measurements that have no significance unless a SPL level is attached. The Go Getter 2 is truly versatile with true AC/DC power supply. All battery powered units include an automatic charging system designed to properly charge and maintain the system’s built-in Lithium Ion battery. The system can be plugged into an AC outlet and operate as normal while the built-in battery is charging. The lightweight Lithium Ion battery have 2,000 recharge cycles compared to 200 for a typical SLA battery. With the battery fully charged, operating time is approximately 6-10 hours at medium volume and 3-6 hours at full volume of continuous music input (longer for speech). A battery indicator shows battery life (fuel capacity) during use.

ADA Compliance: Since Anchor Audio's assistive listening receivers, ALB-9000, also operate in the 902-928 MHz band, they are compatible with the AIR transmitter and can create a simple and reliable ADA compliant sound system.

To comply with the Americans with Disabilities Act (ADA) and the California Building Code (CBC), a minimum of 2 receivers with earphones and 2 neckloops are required. However, the actual number depends on the occupant load as outlined in this Quick Chart. Centrum Sound does not include receivers with any packages. If receivers are needed, they can be added or purchased separately (see the A La Carte menu tab). To learn more about the ADA, please visit our Assistive Listening Systems and ADA Compliance page.