All about the TGS PRO Hearing Enhancement Systems

The TGS PRO 737-738 and TGS PRO MULTI hearing assistance systems save the speakers voice, listeners don’t miss the message, and the presentation does not disturb others. The speaker wears a compact body-pack transmitter and headset microphone. Listeners use receivers and lightweight headphones to hear every word clearly and easily. Even in the back of the group, participants won't miss a word of the presentation. The TGS PRO MULTI and TGS PRO 738 systems will allow up to eight (8) systems to operate in the same area simultaneously, with no cross talk or interference. 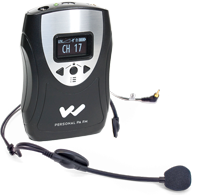 The unit features flexible microphone and auxiliary input jacks, push-button on/off/mute controls, channel lock and selectable compression. The T46 has the ability to operate in dual channel mode, allowing the user to easily switch between two different transmitting channels, each with its own set up parameters. An OLED screen displays current operating status and menu information. The new T46 operates up to 30 hours on two (2) AA Alkaline batteries, and up to 20 hours with two (2) NiMH batteries. Rechargeable capability when used with Williams Sound drop-in chargers. Lightweight with belt-clip, the PPA T46 will operate at a range of up to 150 feet (46m) from the listening audience.

The MIC 100 Headset Microphone shown above is standard with all systems. Because the microphone is always at a fixed distance from the mouth, the audience won't miss a word. The highly sensitive boom microphone is great for applications where the voice level must be kept very low. In addition, the MIC 100 is equipped with an effective wind cone, making it the perfect solution for outdoor tour guide applications. Equipped with a standard 3.5 mm mic jack, the PPA T46 transmitter can also be used with many other microphone styles such as lapel, conference table and hand held units typically used for hearing assistance applications.

accessibility requirements for hearing assistance, requires one neckloop per four receivers or a minimum of two). The PPA R37 receiver is equipped with a integrated volume on/off switch and a green LED power on indicator. The green power on LED will illuminate red indicating low battery power. The PPA R37 receiver operates on two AA alkaline batteries for 50 hours of long-lasting operation. A battery selector switch inside the battery compartment also permits use of NiMH rechargeable batteries. Operating time with NiMH rechargeable batteries is approximately 32 hours.

The PPA R37-8 Eight-Channel Receiver on right is flexible and simple to use. It features a user friendly rotary channel selector switch with access to 8 pre-set wideband frequencies between 72-76 MHz. The PPA R37-8 is digitally synthesized for great audio clarity and stability. It is compatible with the following Williams Sound transmitters: PPA T45, PPA T46, and PPA T27.

A versatile 3.5mm stereo/mono jack allows for a variety of earphones, headphones and/or hearing aid compatible neckloops to be connected.

The PPA R38 Multi-Channel FM receiver share the same ergonomically design features as the select-channel receiver. A on-screen channel selector with easy access to 17 pre-set, wideband frequencies (72-76 MHz) easily lets the user select the appropriate channel. It is digitally synthesized for exceptional audio clarity and stability.  Other features include digital tuning, digital squelch and battery-saving sleep mode. A new stereo jack paired with the mono jack adds compatibility with a variety of earphones/headphones. The battery life for the PPA R38 is approximately 50 hours with alkaline batteries and 32 hours with BAT-026-2 1500 mAh rechargeable NiMH batteries.

The charger helps keep receivers organized and saves cost on having to replace alkaline batteries. The charger features individual charging LED indicators that blink when batteries are ready. The CHG 3512 PRO includes a convenient carry case. A Dual Drop-In Charger, CHG 3502, (right) is also available. The standard version includes a US power supply (120 VAC). Other power supplies are available upon request.

ADA Compliance: To comply with the Americans with Disabilities Act (ADA) a number of hearing aid compatible receivers must be available.

This is accomplished by replacing the earphones or headphones with neckloops which in turn transmit the signal wirelessly via induction into the user's hearing aid(s). Centrum Sound does not include neckloops or wall plaques with any of the packages. If needed, they can be purchased separately (see Earphone section in the above "A La Carte" menu tab). To learn more about the ADA, please visit our Assistive Listening Systems and ADA Compliance page.

Note: The PPA T45 transmitter is approved by the FCC for operation in U.S. markets. The transmitter can not be used in all countries. Check with your government´s radio regulations for 72 - 76 MHz operation.